You can read this article in 5 minutes

Updated information from supply chain visibility provider FourKites has shed light on the extent to which ongoing industrial action at English ports has influenced shipments and dwell times. 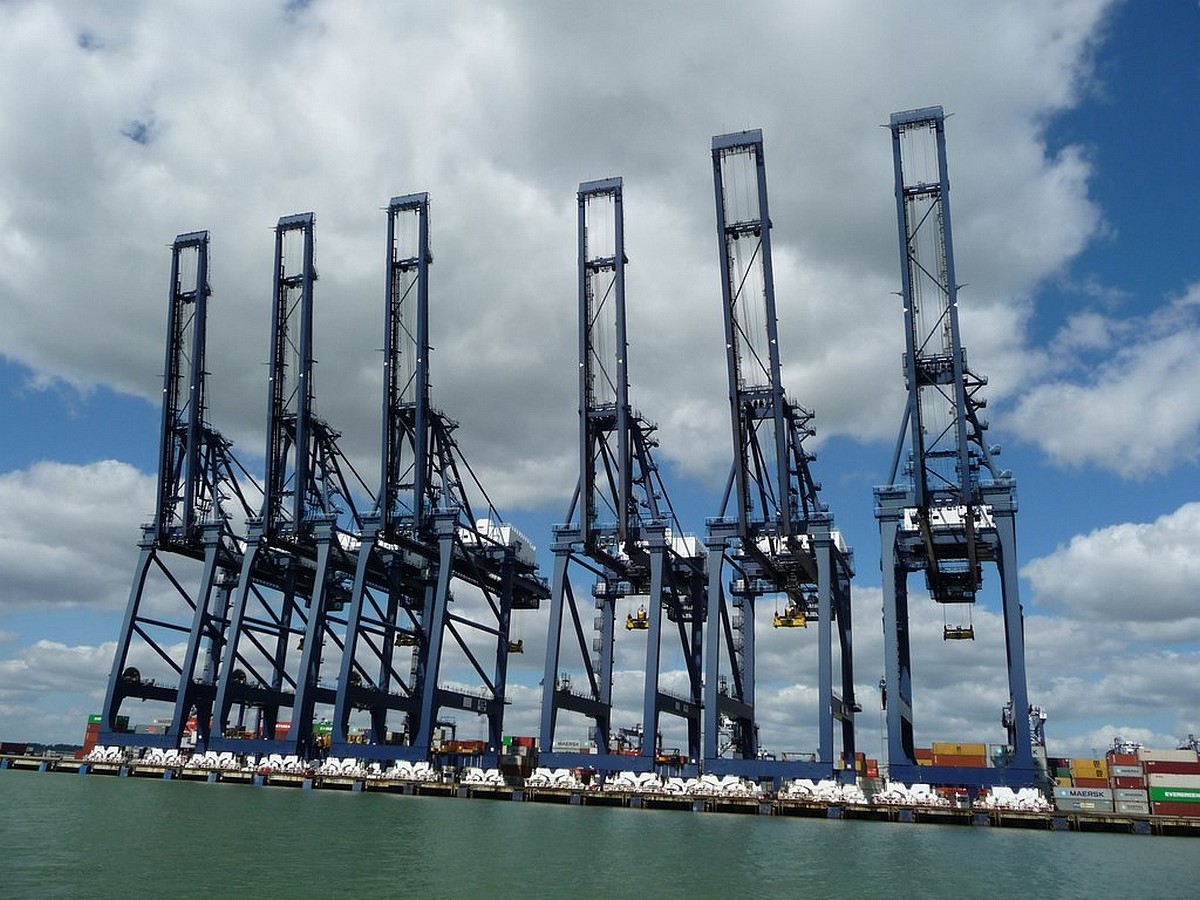 As one would expect, the figures show shipments dropping before and during the strikes. The supply chain visibility provider’s data also indicates that more vessels docked at other UK ports as a result of the strike disruption.

When it comes to the Port of Liverpool, FourKites says it has seen the number of shipments arriving at the port (including exports, imports, and transshipment stops) vary drastically with the strikes that began on September 19th, October 11th, and October 24th.

According to FourKites data, shipments arriving at Liverpool Port dropped by 58% week-over-week during the week of September 11th, before the first strike began. The company adds that this is an indicator that shippers were potentially avoiding the port due to the strike. 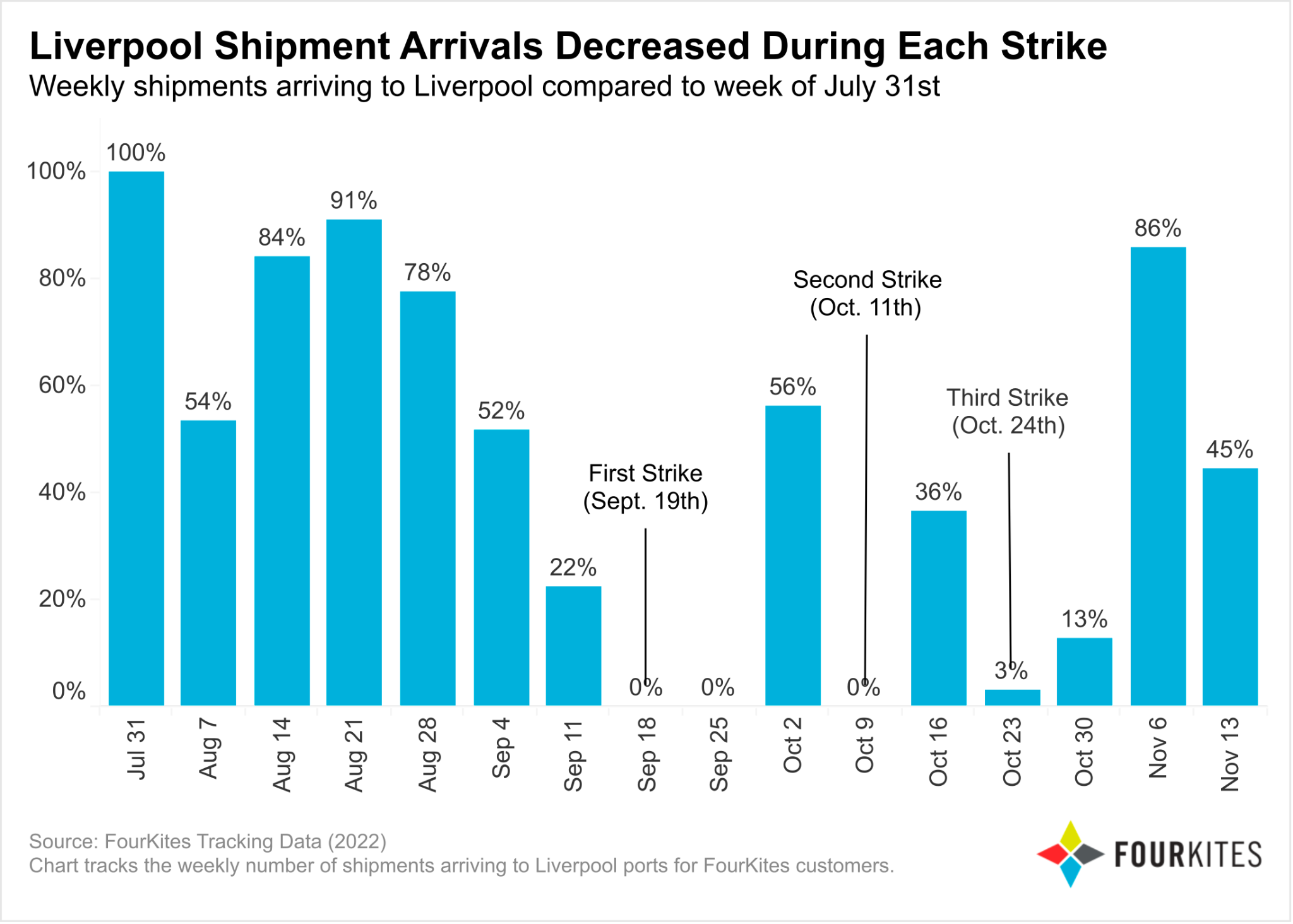 In addition, weekly shipments arriving at the Port of Liverpool during the weeks of October 2nd and 16th were down by 44% and 64%, respectively, compared to the beginning of August. When the third strike began at Liverpool on October 24th, the story was similar, with FourKites customer shipments arriving to Liverpool down 92% week-over-week.

As for the Port of Felixstowe, after the first strike began there, FourKites saw a significant increase in the amount of days spent at terminal for containers already at the facility.

On August 21st (the 1st day of the strike), ocean shipments (including import/export/transshipment) at the Port of Felixstowe had been at terminal for 5.5 days on average for FourKites customers. By August 30th, this had increased to a peak of 10.3 days on average, an 87% increase.

After the initial strike ended, average days at terminal at Felixstowe decreased to 3.8 days on average, though the onset of the second strike on September 27th caused this to increase again by 134% to 8.9 days as of October 10th. 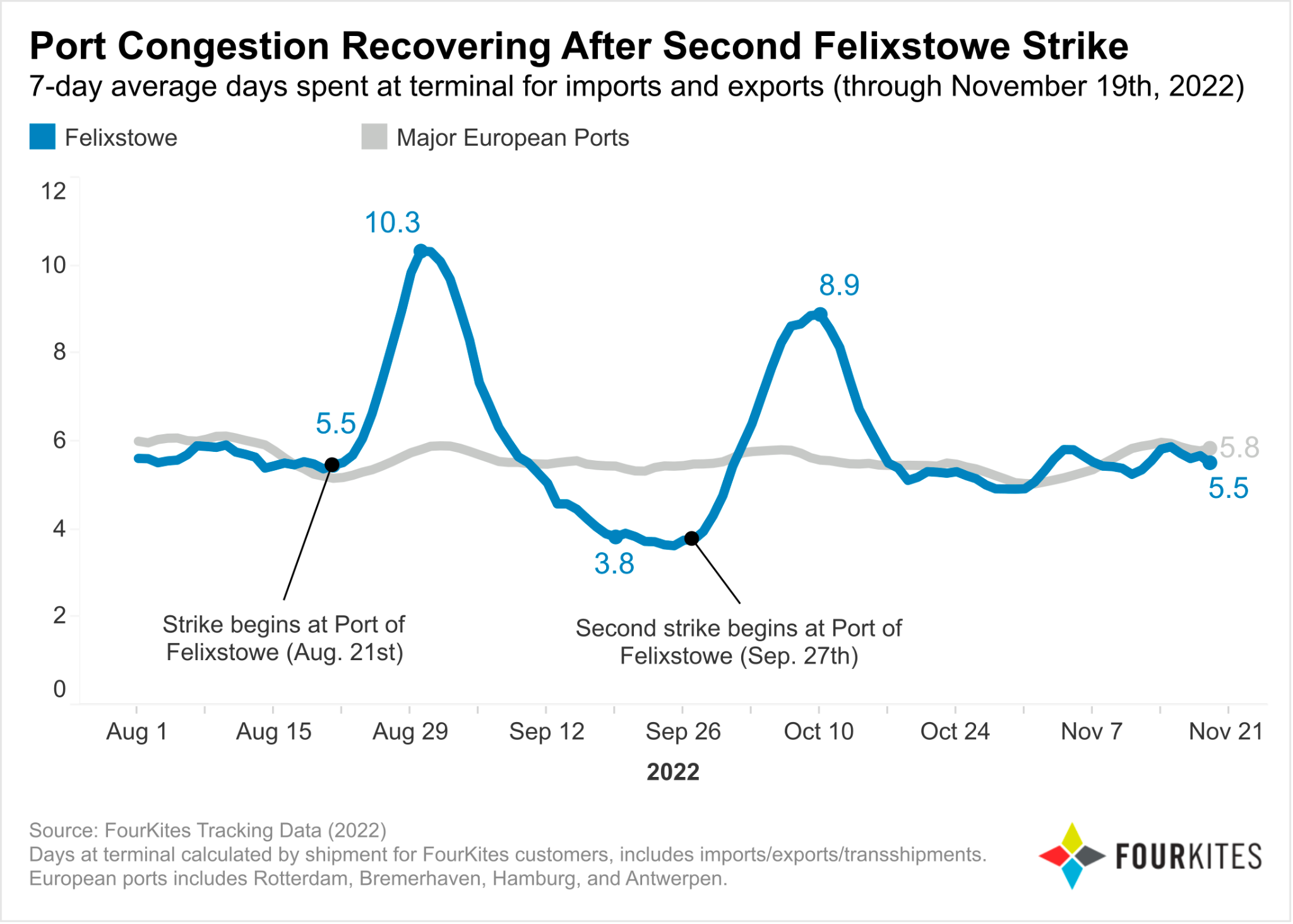 Other UK and EU ports

Over this period, a collection of major European ports (including Rotterdam, Bremerhaven, Hamburg, and Antwerpen) has remained mostly stable, with the 7-day average days at terminal at 5.8 days as of October 17th.

During the initial Felixstowe strike, FourKites saw shipment arrivals to Felixstowe decrease from 20% of all UK port arrivals (during the week of August 7th) to 0%. During this time period, it appears that many shipments may have been rerouted to other ports in the UK such as Southampton, which saw an increase from 13% to 25% over the same two-week period.

Felixstowe also saw a decrease in shipment arrivals as the second strike began, decreasing by 65% week-over-week. There are some signs that shipments were diverted to other ports such as London Gateway, too, as the share of shipment arrivals at London Gateway increased from 10% at the beginning of August to 13% during the week of September 27th, when both Felixstowe and Liverpool had ongoing port strikes at the same time. 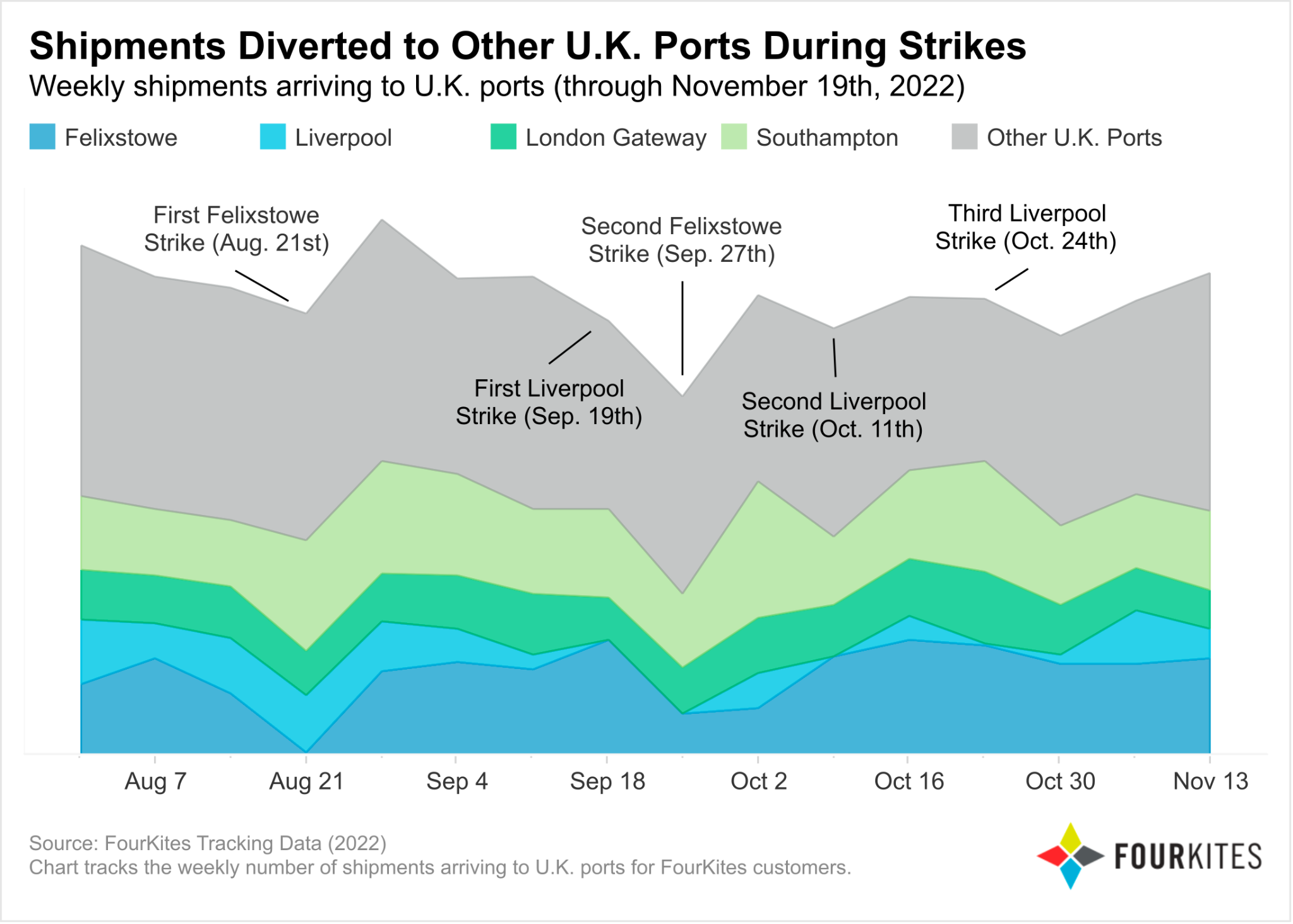 At London Gateway Port, FourKites notes that congestion has been more stable over the past several months. The 28-day average ocean dwell time at London Gateway was 7.9 days as of November 19th. This is an 8% increase month-over-month and a 27% increase year-over-year, but is down 23% compared to the peak seen in May earlier this year. 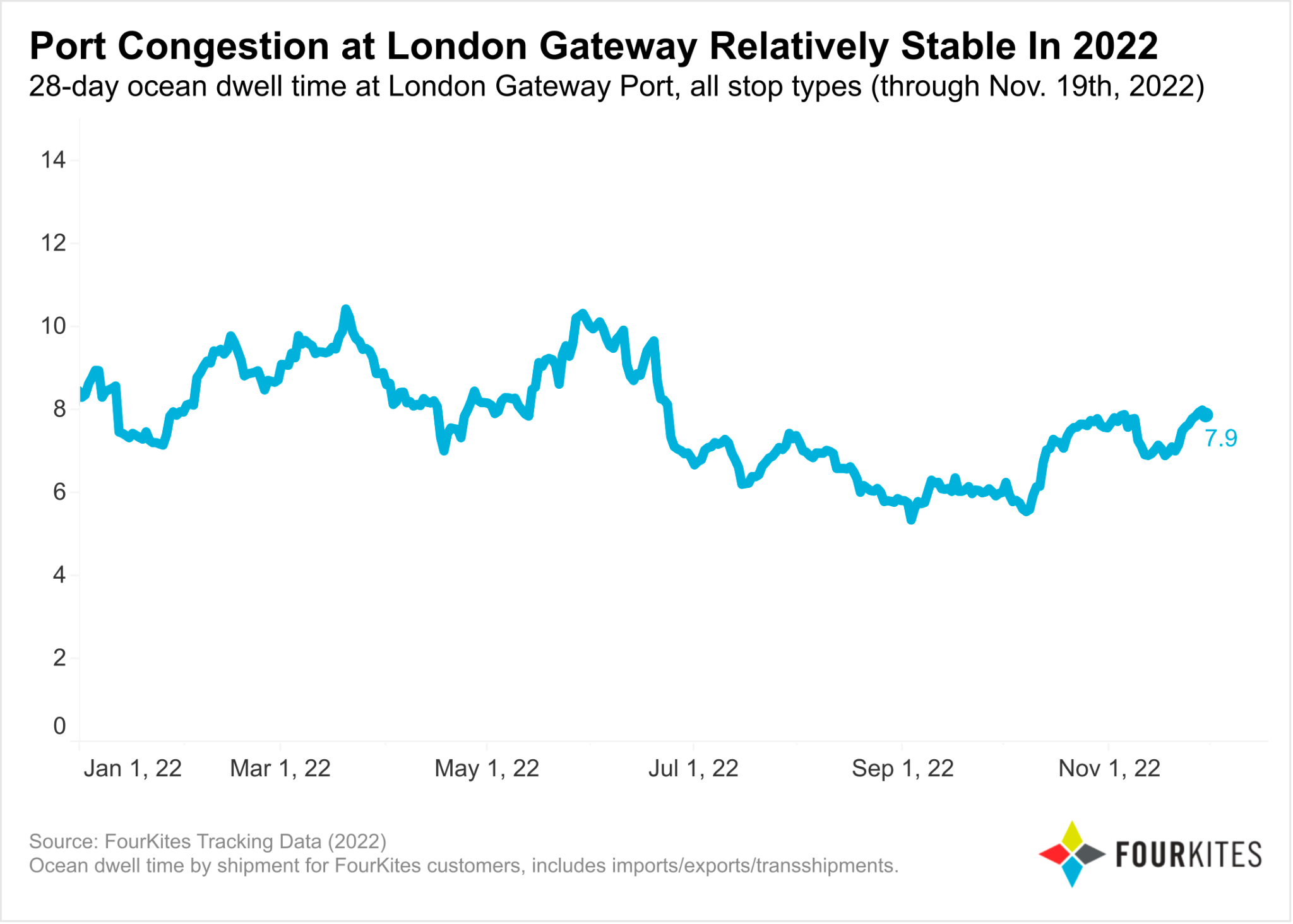 For comparison, FourKites has consistently seen increased port congestion at ocean ports where worker strikes have occurred over the past few years. As FourKites has previously written, the average duration of ocean shipments increased by 15-50% at Melbourne, Sydney, Fremantle, and Montreal after workers’ strikes began.