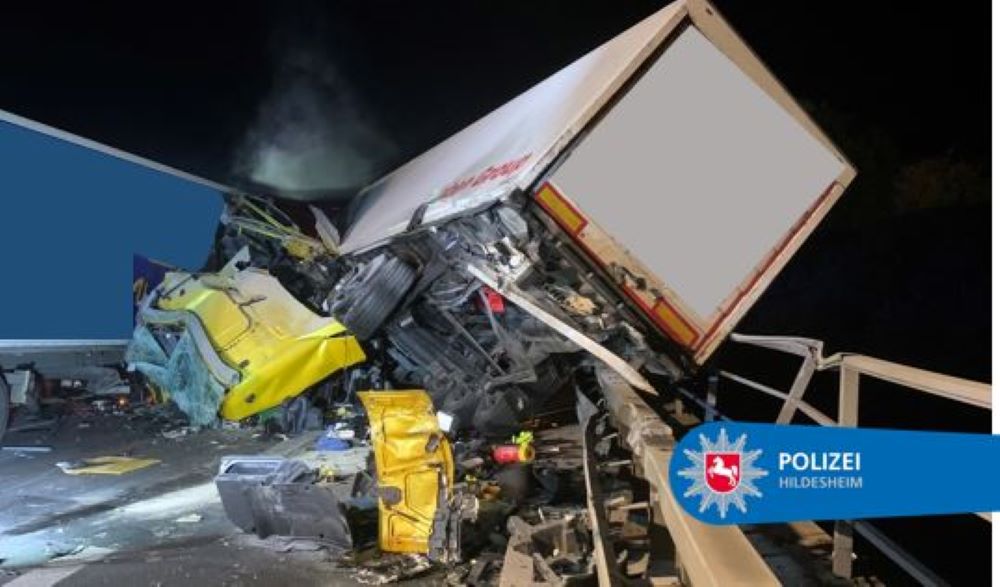 A serious chain collision happened on the German A7 motorway on Tuesday evening when an HGV ran into stationary traffic, hitting three other lorries in the process. Two people were injured in the crash and the motorway had to be closed for more than 12 hours because the road surface at the scene of the accident had to be completely milled off and then re-surfaced.

On Tuesday evening, around 10:00 pm, a severe accident involving four lorries happened on the A7 motorway in Germany. Two people were injured and the southbound lane of the motorway had to be closed for more than 12 hours.

The accident was a chain collision caused by a 22-year-old HGV driver who failed to notice the stationary traffic in front. According to the police report, she swerved to the left into the middle of the three lanes but was unable to prevent a collision with a truck and trailer at the end of the congestion owned by a 34-year-old driver from Lithuania.

The domino effect of the impact resulted in collisions with a lorry driven by a 23-year-old from Hamburg, as well as a semi-trailer driven by a 33-year-old Moldovan. The Hamburg-based driver’s vehicle tipped over to the right onto the outer crash barrier. The truck was loaded with engine oil, some of which leaked out.

The driver who caused the accident was seriously injured and taken to a hospital, while the Lithuanian driver was treated for minor injuries.

Rear-end-collision is the most common accident on German motorways

Last year, 46% more HGV drivers lost their lives on German motorways than in 2020, while the number of deaths in all road accidents fell by 10%. According to experts, the most fatal HGV accidents occur when a lorry runs into the last vehicle stationary in a traffic jam.

“Accidents usually happen during peak hours, with increased traffic on transit routes, usually at the end of congestion formed due to road works,” said Dieter Schäfer, former head of the Mannheim Traffic Police.

40-ton vehicles often run into the vehicle in front of them almost without control, causing drivers to be crushed in their cabs, he adds.

According to the Hellwach mit 80 km / h association, whose aim is to educate drivers and thus decrease the number of such accidents, two particularly important things could be done to change this tragic trend: education and better working conditions for truck drivers.